Jonathan Lethem (based on the novel by), Edward Norton (screenplay)

You can add Little Women to the list! Take a look at even more movies and TV shows that were so nice they made 'em twice (at least).

Upcoming Movies
a list of 24 titles
created 10 months ago

Search for "Motherless Brooklyn" on Amazon.com 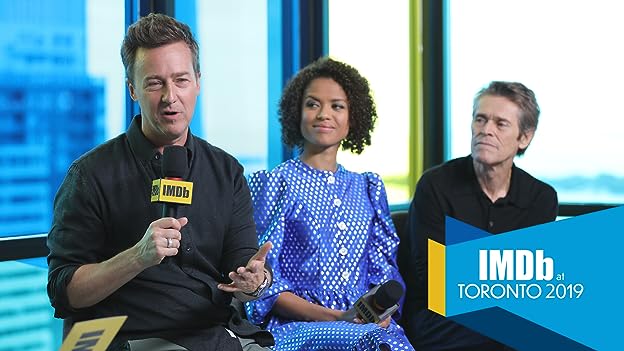 Edward Norton describes the creative obstacles he faced during the long development period for Motherless Brooklyn and what it was like to work with his incredible cast.

An augmented human and Sarah Connor must stop an advanced liquid Terminator, from hunting down a young girl, whose fate is critical to the human race.

The extraordinary tale of Harriet Tubman's escape from slavery and transformation into one of America's greatest heroes, whose courage, ingenuity, and tenacity freed hundreds of slaves and changed the course of history.

A group of women take on Fox News head Roger Ailes and the toxic atmosphere he presided over at the network.

The story of the Battle of Midway, told by the leaders and the sailors who fought it.

A rookie New Orleans police officer is forced to balance her identity as a black woman after she witnesses two corrupt cops committing murder.

An ex-convict working undercover intentionally gets himself incarcerated again in order to infiltrate the mob at a maximum security prison.

A cop of provinces moves Paris to join the Anti-Crime Brigade of Montfermeil, discovering an underworld where the tensions between the different groups mark the rhythm.

American car designer Carroll Shelby and driver Ken Miles battle corporate interference, the laws of physics and their own personal demons to build a revolutionary race car for Ford and challenge Ferrari at the 24 Hours of Le Mans in 1966.

Investigators are confounded over an unspeakable crime that's been committed.

In 1894, French Captain Alfred Dreyfus is wrongfully convicted of treason and sentenced to life imprisonment at Devil's island.

Based on the true story of a real-life friendship between Fred Rogers and journalist Tom Junod.

Set against the backdrop of 1950s New York, "Motherless Brooklyn" follows Lionel Essrog (Norton), a lonely private detective afflicted with Tourette's Syndrome, as he ventures to solve his friend's murder. Armed only with a few clues and the powerful engine of his obsessive mind, Lionel unravels closely-guarded secrets that hold the fate of the whole city in the balance. Written by Warner Bros.

Rated R for language throughout including some sexual references, brief drug use, and violence | See all certifications »

The massive Penn Station was demolished in October 1963. See more »

Alec Baldwin's character (based on Robert Moses) wash shown pulling out a pack of Chesterfields (an unfiltered cigarette) and removing a smoke. However, the next scene and other subsequent scenes showed smoking with filtered cigarettes instead. See more »

Shauna Lyn... this is yours as much as mine. See more »

This FAQ is empty. Add the first question.

Looks great and is well acted, but the pacing is turgid
22 December 2019 | by Bertaut – See all my reviews

Jonathan Lethem's 1999 novel Motherless Brooklyn may appear to be an old-fashioned private-eye noir, but in reality, it's about gentrification, institutionalised racism, political corruption, and how such things are woven into New York City's historical fabric. It's about how the city of today was built on the cruelty, prejudice, lies, and unchecked power of yesterday. The novel is a quintessentially postmodern narrative, fracturing the relationship between the physical and the temporal by taking the sensibilities of 1950s gumshoe noir and supplanting them into an end-of-century milieu. On the other hand, the 1957-set film is more literal, less interested in playing with form. Written for the screen, produced, directed by, and starring Edward Norton, this two-decades-in-the-making passion project asks how much corruption are we willing to forgive and whether truth and ideals even matter in a world in which there's a direct confluence between power and amorality. However, far too in reverence to films such as Chinatown (1974) and L.A. Confidential (1997), Motherless Brooklyn is never anything more than your average noir mystery - a likable but flawed protagonist begins what seems like a fairly straightforward investigation, only to be led down a rabbit hole of corruption and power games, until he's in the midst of an elaborate political conspiracy. And whilst it's aesthetically impressive (the period detail drips off the screen) and the acting is universally excellent, the film can be spectacularly on the nose and didactic. It also moves at a snail's pace, and Norton is never really able to generate any sense of urgency, making the whole thing feel laborious, and, ultimately, rather pointless.

New York City, 1957. World War II veteran Frank Minna (Bruce Willis) runs a small PI firm staffed by men whom Minna rescued from an abusive orphanage when they were still children. He's most fond of Lionel Essrog (Norton), who suffers from what we know today as Tourette Syndrome, but who also has a photographic memory. As the film begins, Essrog is listening in on a clandestine meeting between Minna and unidentified parties. When the meeting becomes contentious, tragedy strikes, and although none of Minna's staff know who he was meeting or what he was investigating, Essrog determines to get to the bottom of the case, slowly unearthing a labyrinthine conspiracy involving local government, urban redevelopment plans, and housing relocation programs.

Anyone familiar with the novel will recognise that Norton has made sweeping changes, not just in terms of relocating the story to 1957 (thus making explicit what was so indelibly postmodern in the book), but so too in terms of plot and character. The most significant addition is Moses Randolph (Alec Baldwin), a corrupt and powerful real estate magnate who's clearly based on New York's so-called "master builder" Robert Moses, the man largely responsible for the city's high-way infrastructure, the departure of the Brooklyn Dodgers to LA, the development of Long Island, and whose controversial philosophies regarding urban redevelopment continue to be implemented all over the world. Operating with almost complete autonomy from regulatory oversight, Moses was a narcissist obsessed with power, and an amoral , and so too is the character in the film. Indeed, although the film is ostensibly based on Lethem's novel, it contains more than a hint of Robert A. Caro's Pulitzer Prize-winning biography of Moses, The Power Broker: Robert Moses and the Fall of New York (1974).

Motherless Brooklyn's most obvious strength is its aesthetic, about which I really can't say enough. Beth Mickle's production design, Michael Ahern's art direction and Amy Roth's costume design are all exceptional, contributing to the nuanced and immersive period-specific tone, with the milieu feeling lived-in and completely authentic.

Norton's direction is, for the most part, straightforward and unfussy, but one visual motif he uses several times is shooting directly from Essrog's POV. First-person shots in cinema are infrequent enough that when a director uses the technique a few times, it stands out. What's most interesting here is when Norton uses it - three scenes in which Essrog is lying on his back either currently being beaten up, or having recently been beaten up. It's a nice (if somewhat unsubtle) directorial choice, drawing us directly into Essrog's experience, but only when he's at his most vulnerable. On the other hand, the tonally inconsistent use of dream scenes is far less effective, feeling as if they're from another film entirely.

In terms of the decision to set the film in the 50s, it actually makes sense. One of the reasons the novel works so well is because the modern setting clashes with the mannerisms of the characters, the style of the dialogue, the cadences of the plot, all of which are straight out of classic 40s and 50s noir. The effect of this is quintessentially postmodern - a self-reflexive pastiche that's drawn from both the 50s and the 90s, and yet which belongs to neither. And although this works tremendously on the page, Norton argued (correctly, I think) that to try to replicate this on film - have the story set in 2019 (or even 1999), but told in the manner of a classic noir - wouldn't work, as it would send mixed and confusing messages to the audience.

And so, he simply relocated the story to the time-period which underpins the style of the novel. With this in mind, the film features many of the trappings of classic noir - the world-weary private eye, the laconic voiceover speaking directly to the audience from an unspecified point in time, the seemingly important clues which ultimately lead nowhere, the seemingly irrelevant clues which ultimately lead somewhere, the smooth (so smooth) jazz score, the smoky (so smoky) jazz clubs, the chiaroscuro lighting (albeit very restrained), the antagonist who seems to see all, the political corruption. There's even a scene in which Essrog finds an address written on a pack of matches. About the only thing missing is a femme fatale, although there is a woman who may (or may not) know more than she's letting on.

For all its thematic importance and laudable aesthetic aspects, however, I found Motherless Brooklyn disappointing. For one thing, there's the pacing, which is so lacking in forward-momentum that the story is practically somnolent. The narrative is unfocused and flabby, needing at least one more editorial pass, occasionally doubling back on itself and wasting time giving the audience information we already possess. Partly because of this, it's a good 20 minutes too long (at least), and much of it feels like padding - characters that do nothing, clues that lead nowhere, scenes which don't advance the story or develop the characters. I understand Norton wanted to let the material breath (the novel is around 300 pages), but there's a difference between giving the characters and themes room to develop and stalling for the sake of it, and so much of the film feels like the latter.

There's also a significant disconnect between the politics and the detective story. In Chinatown, everything feels organic - the personal and the political are intertwined, with the political elements never feeling artificially shaped so as to fit a generic template, or the genre structure never feeling artificially bolstered with extraneous political elements. In Motherless Brooklyn, however, Norton is never really able to integrate the two, leading to a kind of identity crisis, with the film unable to find a comfortable middle ground - in trying to be both a noir mystery and a societal commentary, it ends up as neither. Another issue is that because the novel features 50s values displaced into the last years of the century, the endemic racism is deeply disturbing - society today is more enlightened about such things, but here's a novel in which characters are acting like it's 40 years prior despite being set in a modern milieu. This is a vital part of Lethem's postmodernist deconstruction of power structures. However, with the film set in the actual 1950s, the racism just comes across as period-appropriate window dressing, losing virtually all of its thematic potency.

An old-fashioned detective story with a lot on its mind, Norton's passion for the material is self-evident. However, that passion hasn't translated into an especially good film. Void of almost any tension, although it looks great, Motherless Brooklyn fails to unify its genre elements and its political preoccupations, resulting in a film unsure of its own identity and unable to make us care about much of what it depicts.